There are three main benefits to hearing with both ears, known as binaural hearing. In previous posts we’ve taken a look at how binaural hearing is necessary for sound localization and improves speech understanding in noise, and now it’s time to talk about the third important benefit. This one has to do with something called the “head shadow effect”.

The head shadow effect is the result of a Single-Sided Deafness. When one ear has a hearing loss, then it’s up to the other ear to process the sound information from both sides of the head. That’s why it’s called a shadow: the head blocks sound in the same way that it would block sunlight.

This head shadow has different effects, depending on whether or not someone has Single-Sided Deafness or hears binaurally.

Basically, for someone with Single-Sided Deafness the head shadow can block important sounds from reaching the hearing ear. To help understand what happens, let’s imagine a guy named Dave. Dave has a hearing loss in his right ear and can hear normally with his left ear.

Since the hearing loss is on his right side, sounds from all directions (left and right, front and back) will be heard only through his left ear. This means that sounds from the right side are in the shadow and will have to travel around his head to be heard. In fact, this shadow would cause sounds from Dave’s right side to seem about 7 dB quieter than those from his left, depending on the specific frequency.¹

This not only causes sounds to seem quieter, but it can also make them difficult to understand. This is especially apparent in noisy situations. Think of Dave: if he’s talking to someone in front of him but there’s a loud noise to his left side, his left ear will have to process both the sounds of the speech and the sounds of the noise. That means that sounds from the front, back, and right sides will be more difficult to hear, and speech will be more difficult to understand.

For Dave, this means that he can use the CI to hear sounds with both his left and right ear. If that noise is still to his left, his head will block the noise but not the speech. 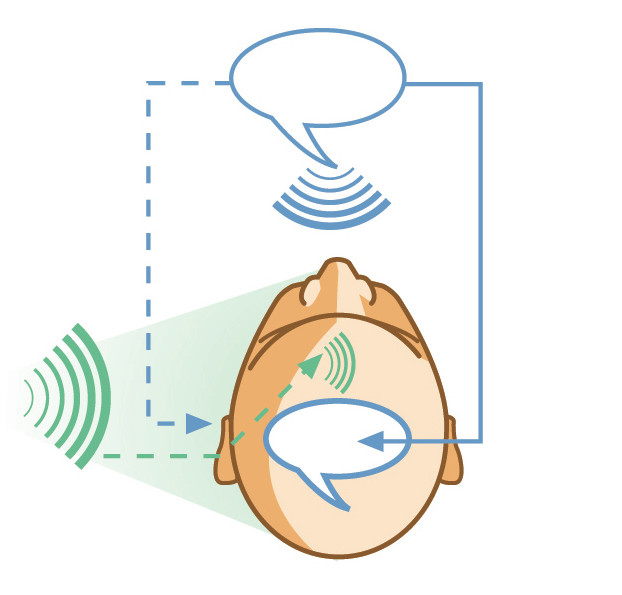 The head shadow effect with a cochlear implant.

At right is a quick diagram to show how this happens:

The noise from his left side will still reach his left ear, but it’s blocked by the head from reaching his right ear. His right ear then hears only the speech without the noise interference, so it can be easier to understand.

Now Dave can hear sound clearly and know if it’s coming from his left or right side. And who wouldn’t want that?

Are you struggling with hearing loss in one ear? If your life is being seriously affected by your hearing loss, don’t give up hope. Learn how a MED-EL cochlear implant can help you hear again with both ears and connect with us for local support and guidance: Cochlear Implants for Single-Sided Deafness