Alison from Australia is a BONEBRIDGE user, HearPeers Mentor, and passionate swimming teacher. In today’s guest article she talks about her experiences with BONEBRIDGE and why SAMBA 2 fits her lifestyle better than her old hearing system.

My name is Alison and I live in Adelaide, Australia. Currently, I work as a school support officer in a high school and I’m a fully qualified swimming instructor: I teach swimming, water safety, and infant aquatics. I love teaching swimming – that’s my real passion! I teach students with disabilities in one-on-one classes for a small local swim centre. 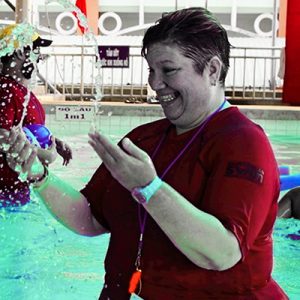 My hearing loss journey started when I was a little girl. When I was around six years old, a teacher told my parents that they thought I was having trouble hearing. At this point of my childhood, it was mainly glue ear, leading to frequent infections in the middle ear.  My parents took me to an ENT specialist, and I had the “typical” childhood ENT surgeries; my adenoids were removed and grommets were placed in both ear drums.  Theoretically, that should have been the end of my hearing problems, but it was not. My adenoids grew back (all in all I had them taken out three times!) and I had more grommet surgeries (in and out) than I can count. It felt like a never-ending circle.

Throughout my youth, I loved music and played wind instruments, especially the clarinet and the flute. After high school, I decided to study music, and I have a bachelor’s degree in music. At some point—I had almost finished my studies—another ENT surgeon told me that I had dysfunctional eustachian tubes. As a result, I was told I should not play wind instruments anymore because of the pressure that was created when playing the instruments, which could blow bacterial infection into my ears. That was really hard for me, especially as I had planned on becoming an instrumental music teacher. I thought: “Right, I studied music, so what next?”. 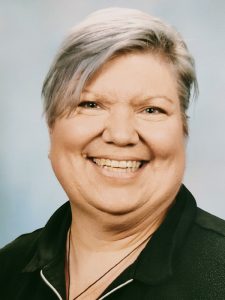 During that time—even before giving up the wind instruments—I had massive infections in the mastoid air cells on the left side. In around 1993 I had my first mastoidectomy, a surgery where they drill out the bone and air cells behind your ear. I hoped that would be the end of it, but it was not. The infections kept recurring and the issues continued. I would visit an ENT surgeon to have grommets inserted under local anesthesia in the chair —I didn’t wish to spend a whole day in a hospital again, I was so tired of it. The grommets did help my hearing, but the infections kept coming back. Because of my good hearing in my right ear I could cope, but the permanent infections in the left side were an issue.

When I saw another ENT surgeon in Sydney in 2007, I knew I had to do something about my situation that would make a permanent difference. I trusted the surgeon and went for quite a radical surgery on his recommendation: My left middle ear was obliterated, so the small bones were taken out, the eardrum removed, and the whole ear canal closed on the left side. It did help with the infection issue, but it meant that I could now only hear on one side. Single-sided deafness affected my daily life significantly. I realized quickly that crossing the road was difficult, as I couldn’t tell where cars were coming from. I was also unable to hear people coming up behind me, talking to me. But I did get used to it and was doing okay for some years.

However, by 2015 I had developed tinnitus in my deaf, left ear. The constant ringing in my ear was a burden in everyday life. I sought help from another ENT, partly because I was afraid that my good, right ear might be affected at some point. My new ENT specialist said: “Let’s put some sound on your left side to distract you from the tinnitus”, and so began my journey into the world of bone conduction hearing aids. I received the magnetic BAHA (bone-anchored hearing aid).

Looking for a New Hearing Solution

I used my BAHA system for five years. I was doing okay, but I had reached a point where I felt it did not suit my lifestyle anymore and I needed a new solution. There were some issues that I didn’t wish to deal with anymore.

First, I was frustrated with the magnets. One magnet strength was too strong and would cause pain. My head hurt at the end of the day and I could not wait to remove it. But if I went for the lower magnet strength it wasn’t quite strong enough and the processor would fall off my head.  Moreover, my BAHA could not go in, on, or around water at all! Not great for a swimming teacher and passionate swimmer. I also experienced a lot of static feedback. You only had to touch it slightly or let a wisp of hair touch it in the wind, and you would get static feedback. It was annoying and from what I’ve read on social media groups affects many other people too.

BONEBRIDGE: An Answer to My Questions

Because of these reasons I chose BONEBRIDGE. When looking for an alternative to my BAHA, I did an incredible amount of research and BONEBRIDGE stood out as something really different. Together with my surgeon, I had to find out if I could get the implant due to my history of many ENT ear surgeries. Luckily, I could, and I then had to get the implant approved by my private health insurance.

Once these hurdles were passed, I had my BONEBRIDGE implant surgery in November 2020.

I now use it with the SAMBA 2 audio processor and it is everything I was promised before the surgery: The clarity of the sound is phenomenal compared to BAHA. To me, BAHA was quite tinny and distorted. It was almost like hearing a robot speak. The sound of the BONEBRIDGE is so much closer to hearing naturally.

Why I Love SAMBA 2

The SAMBA 2 is lightweight, but has great attraction at the same time. You don’t really notice you are wearing it. Sometimes I even touch it just to feel that it’s still there. In contrast, I could feel the BAHA and it was heavy and painful.

Very important in daily life: There is no static feedback. There is no distortion at all, no buzzing or whatever. With BAHA, the noise of wind rushing would be quite annoying. In winter, I often had to take the BAHA off because a) it could not get wet and b) the wind noise was terrible.

I love how SAMBA 2 really does adapt to the situation you are in and the listening environment around you. Already after a couple of times driving in my car and listening to music, I started to notice the difference. SAMBA 2 had started to focus on the music coming from the radio and to ignore the car noises—so I can hear exactly what I want to hear when in the car. I haven’t needed to change or adapt anything with the remote control programs as yet.

The results of my hearing test have also been better. With my first test with SAMBA the results were better than with BAHA and after receiving SAMBA 2 there was even a slight improvement to SAMBA.

Recently, I joined the HearPeers Mentor program. I just want to help people understand that there are so many types of hearing loss and different options for different needs. First, you must understand what type of hearing loss you have, then you have to ask many questions. I think if you want to make a decision to go down this path it is vital to talk to people who have really experienced the device. For me, being a HearPeers Mentor is not about giving health advice. It’s about sharing my experience and what has worked for me in the hope it will help others.