Music has played an important role in Markus Zoitl’s life since childhood. At the age of 16, the passionate pianist trained to become an organ builder. After several years of professional experience, it was clear to him: “Sound is what I want to focus on and specialize in.” After several years in an internationally-known organ building company, he ventured into self-employment and advanced to become a  sought-after organ tuner. Wherever organs needed to be restored or tuned, he was in demand: from Europe to China to Australia. As a freelancer, he was able to complete restorations and new builds all over Europe. Markus’ base for him and his family is Germany, which he describes as “one of the best countries in the world for organ building”..

Three years ago, at the peak of his professional career, Markus woke up one morning and immediately noticed that something was different. His left ear felt like it was full of absorbent cotton. Markus had always had excellent hearing, but suddenly it was significantly worse on his left side and he could hear a loud, unpleasant tone that wouldn’t stop. The ENT doctor diagnosed conductive hearing loss combined with tinnitus and prescribed cortisone treatment, as he suspected an ear infection. However, this only helped for a little while. As soon as the cortisone was discontinued, the tinnitus returned immediately.

The doctors at his clinic in Dresden discovered that Markus—like Beethoven—suffered from otosclerosis. In his case this caused his hearing loss to happen suddenly and not gradually, as is usually the case with otosclerosis. Knowing how important hearing is for Markus, they didn’t even consider using a stapes prosthesis, which is the go-to treatment. Destroying the middle ear with a stapes implant and compromising on sound perception seemed too great a risk to them.

As an interim solution Markus received the ADHEAR bone conduction system, which he could stick behind his ear. Markus was pleased with the significant improvement and was even able to use it to tune an organ, but he still worried about his career. His doctors recommended BONEBRIDGE. This bone conduction implant not only provides a more natural sound than a stapes prosthesis, but also allows the natural structures of the middle ear to be preserved.

New Hope Thanks to BONEBRIDGE 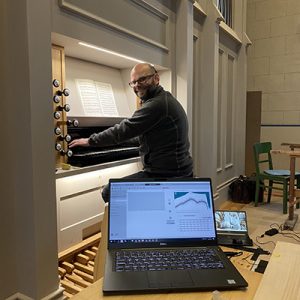 About a year after his sudden hearing loss, the organ tuner received a BONEBRIDGE implant. The initial fitting with SAMBA audio processor was fine, but Markus quickly realized that his demands were much higher than most hearing implant users. He has to hear the fine details of the organ sound, the differences of the organ stops, the individual sound atmosphere of an organ, and the church as an acoustic space. The adaptation of his first audio processor, SAMBA, therefore didn’t take place in a hearing clinic, but rather in a cathedral, true to the sound. And his SAMBA 2 was adjusted while he worked on a new organ project.

“The MED-EL engineers spent hours fine-tuning both organs with me directly. Very loud and quiet stops must be transparent and naturally audible. Quiet pipes must therefore not be amplified, loud stops must not be overdriven, and the processor must remain ‘quiet’. And this varies from 20 Hz to approx. 9000 Hz.

When listening with BONEBRIDGE, the processor should block out everything I don’t want to hear. This already works excellently with SAMBA 2. The sound of SAMBA 2 gradually approaches “natural hearing”, especially with loud sounds,”

You quickly realize how important sound is to Markus when he talks about organs from different eras. “The modern organs are too smooth for me. I now work almost exclusively on historic, old organs, or reconstructions, preferably from the early Baroque to the early Romantic period. They have a more honest sound, not as ironed out as the modern organs.” Even though Markus’s work is strongly influenced by craftsmanship, in the end he has to judge the music if he wants to capture the individual sound character of an organ.  This activity requires full concentration, and Markus can only work on adjusting the volume and tonal character in the mornings and for a maximum of six hours per day. “After all, in the morning you hear more precisely and with more nuances than in the afternoon,” explains the organ-building maestro. The rest of the day he spends tuning with the help of modern tuners. This way his ears can even have a rest.

The Sound of Success

Markus’ concern about his professional career was huge after losing hearing in his left ear. How would his customers react? But since getting his implant, he has successfully voiced seven organs in various countries. This shows the native Austrian that he can still do excellent work with BONEBRIDGE, which is appreciated by his customers.

“When a painter with glasses paints a picture, no one doubts that he can do it. In the case of musicians with hearing problems, there is quite some doubt.”  The organ tuner is the best proof that with BONEBRIDGE people with hearing loss can still work successfully in professions where good hearing is a prerequisite. And with his passion and discipline, he has become a role model for others affected by hearing loss.

Read on to find out how SAMBA 2 has changed everyday life for Sophie from the UK.