We’ve talked about how Assistive Listening Devices (ALDs) can help cochlear implant recipients, as well as those with other hearing implants or hearing aids, hear more clearly. Now we want to go a little bit more in-depth into one of the most widespread ALDs: FM systems.

FM systems are an Assistive Listening Device, which means they’re an accessory that connects a sound source with a hearing aid or cochlear implant audio processor.

The system consists of two parts: a transmitter and a receiver. The transmitter picks up sounds from the speaker and converts them into wireless signals, which are sent to the receiver and on to the audio processor.

The receiver is a small accessory that attaches directly to your audio processor when you use a battery pack with a 3-pin connection, like the FM Battery Pack. Here’s what it looks like with an OPUS 2; it’s the small silver device at the bottom: 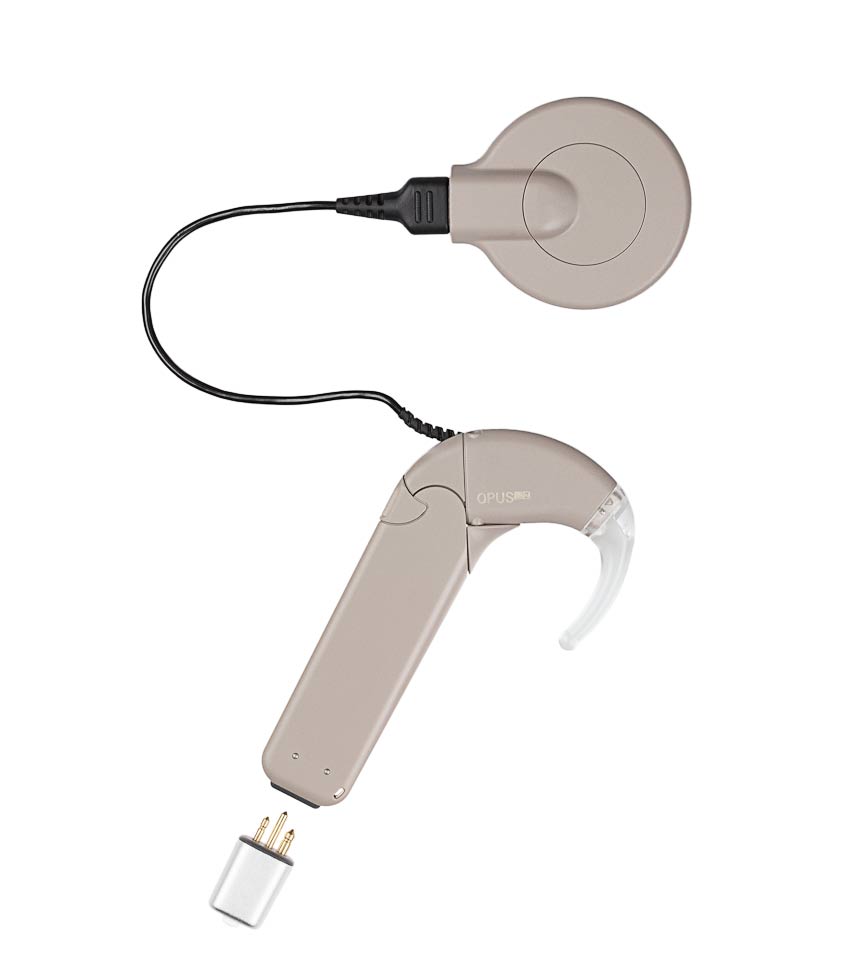 An FM System receiver connects to any audio processor with a 3-pin connection as shown in the picture.

It’s called an “FM” system because it’s just that: a mini FM radio station. The transmitter and receiver each tune into a specific radio frequency so that they connect only with each other and aren’t affected by other wireless signals like telephone or WiFi networks. 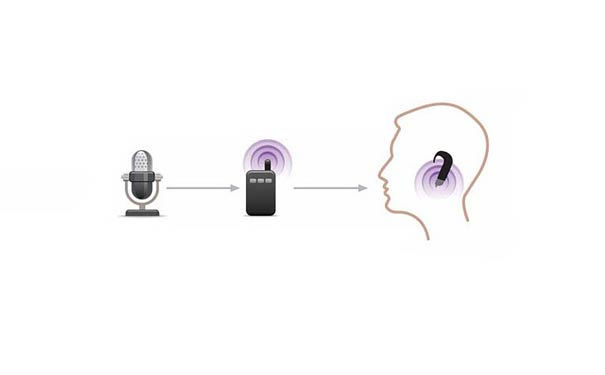 An FM System picks up sounds with a microphone and transmits them wirelessly to a receiver, often connected directly to the audio processor.

With an FM system, it can be a lot easier to hear the speaker. Because the sound is sent wirelessly, it doesn’t matter how far apart the speaker and listener are from each other—as long as the listener is within range of the FM system’s signals, he or she will hear the speaker as if they were standing right next to each other.

In principle it’s kind of like a tin can telephone but without the wire. Someone standing on the other side of the room can speak into a microphone, and anyone tuned into the FM system will hear it as if they were right next to the speaker: the transmitter sends the sound directly to the receiver and audio processor.

Where are FM systems? Lots of places!

There are a few different ways that FM systems are installed. One way is a personal system, where someone carries around a pocket-sized microphone and transmitter that sends signals to people usually just in the same room. For example, a teacher could wear a small FM transmitter around the classroom so that wherever he or she is speaking into the microphone, the students tuning in with a receiver can hear the sounds.

Another way is having an FM system installed into a building. This is similar to an induction loop system, in that it usually uses fixed microphones and a long-range FM transmitter so that the listeners can move around the building while still hearing what’s being said into the microphone. Some of the most common places where FM systems are installed include theaters, conference rooms, or places of worship.

The Right One for You

There are many different companies which make FM systems, so which one you choose might depend on where you live and what’s available. Because of this, we don’t outright recommend a specific system. But, what you can do is talk with your audiologist or other medical professional to see the pros and cons of the FM systems that are available and choose the best one for you.

Additionally, we’ve put together this online compatibility guide which can help you check if a specific FM system is compatible with your audio processor.

This post was written with help from Salma Asim, a clinical specialist at MED-EL.

Donna Sperandio
Donna Sperandio is a Listening and Spoken Language Specialist who currently works as Head of Rehabilitation for MED-EL. She has worked for twenty years in clinical rehabilitation positions in Australasia and the UK, and has trained rehabilitation specialists around the world.
Recommended Posts
NEWEST TIPS AND TRICKS:
NEWEST TECHNOLOGY POSTS:
NEWEST GUEST ARTICLES:
Other languages
Search
Contact Us
Fill out our simple contact form and we'll get in touch with you.
Contact now
About MED-EL
Important Safety Information
Find MED-EL In My Country