You might know that a cochlear implant sends electrical signals to the cochlea, but have you ever wondered where they go from there? They go straight into the brain!

How the Brain Hears

As we’ve shown in our post showing pictures of the cochlea, the cochlea is filled with thousands of nerve cells. Each of these cells connects directly to the auditory brainstem, which is a part of the brain responsible for processing sound information.

But what does it look like when this information is processed? And how exactly do we see it? Here, we’re going to show you how, because we think it’s cool to be able to see exactly where and how someone hears.

It’s all done with a special brain scanner called a Positron Emission Tomography (PET) scan. PET scans make it possible to watch brain activity without surgery, and allow doctors to study someone’s brain activity in real time. As we know exactly which parts of the brain are responsible for understanding sound, we can focus on these parts of the brain when looking at the scan results. When PET scans are used to watch someone with a CI, we can see exactly how their brain responds to the sound signals coming from their implant.

What do these scans look like? Good thing you asked! Here’s a scan that shows the brain responding to sounds from a CI: the colored sections show where the brain is working, with brighter areas indicating more activity. 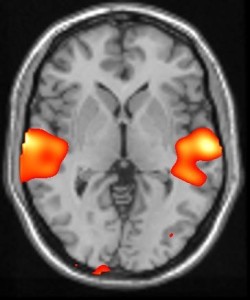 You can see that the two parts of the brain responsible for hearing (called the auditory cortexes) are on either side of the brain. It’s these two sections that light up when you hear, whether it’s with a CI or hearing implant, or as with normal hearing.

What Do These Scans Show?

Dr. Green) has been using PET scans in studies since starting at Manchester Royal Infirmary. Through these studies, he’s gotten a pretty good understanding of how the brain responds to, and understands, the information from a CI. What can we learn from this?

Another really interesting fact is that the regions of the brain aren’t fixed: although different parts usually focus on one thing, like seeing or hearing, these roles can overlap. Check out the scan below: 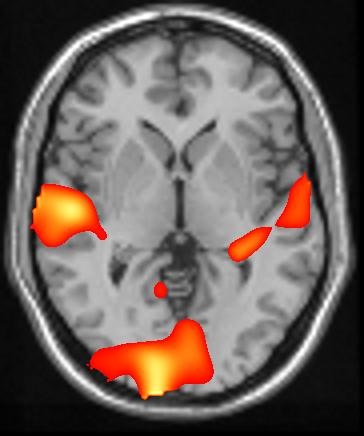 Here you can see how both the left and right side are active, as in the first scan. But what’s that huge lit-up part at the back of the brain? It’s the visual cortex, which is usually active only when someone is seeing. However, for this CI recipient we can see that they also use part of their visual cortex to hear. Isn’t the brain amazing?