When Rosalyn and Justin from the United States found out that their first child Lia was born with Usher Syndrome, a rare genetic disorder resulting in hearing and vision loss, they were devastated. While bilateral MED-EL cochlear implants enable her to hear the world around her and to communicate, Lia’s parents want to do everything they can to save their daughter’s vision. In today’s blog, they tell their story and why they decided to create their foundation, Save Sight Now.

My name is Rosalyn, together with my husband Justin and our daughter Lia, I live in San Rafael, California. Justin and I met while living in San Francisco – he is a principal industrial designer and I am a private chef. We share a love of the outdoors, good food, and traveling. We were married in 2016 and just one year later we were thrilled to learn we were becoming parents. After a healthy and uncomplicated pregnancy, Lia was born on March 14, 2018. A beautiful, smart, feisty little soul entered our world and we’ve been in love ever since. 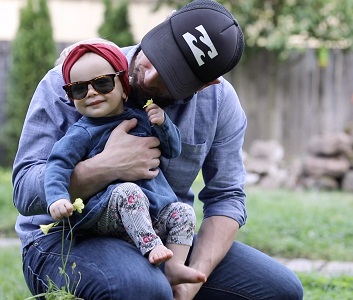 Just 12 hours after Lia was born, a nurse asked Justin to accompany her to another room while they performed a standard newborn hearing screen. Lia failed that test and so began our new life – a life of constant concern. Instead of enjoying our sweet little baby, we spent those precious moments worrying. Can she hear anything? How bad is it? Is it just fluid in her ears? The doctors and nurses told us not to worry, but we knew something wasn’t right.

Lia was 3 weeks old when she was diagnosed as profoundly deaf. We were crushed and cried the entire car ride home and for days to follow. “What can we do?” was all I could manage to say through my tears. After being told hearing aids would be useless for Lia the audiologist mentioned cochlear implants as a potential option – it was the first time we had ever heard of them.

In the coming months, while we waited to learn if Lia was even a CI candidate, Justin and I dove into research about this medical device that could give Lia the chance to participate in the hearing world. A device that neither of us knew even existed, was now going to be the most significant thing in our lives. We spoke with everyone who knew about them. Audiologists, surgeons, CI and sound engineers, deaf and hard of hearing specialists, sales reps, and parents of children with cochlear implants.

It was difficult to get a straight answer on what brand to choose, but after reading medical performance reviews about the top three brands and after Justin – who’s a seasoned industrial designer – spoke with engineers from each company, we felt confident MED-EL was the right choice.

We found a quote that said, “If you care about your child appreciating music, go with MED-EL, if you care about having an app on your phone, go with another brand”. We cared about reliability, quality of sound and preservation of the cochlea – that’s why we chose MED-EL.

Lia was 6 ½ months old when she underwent bilateral cochlear implant surgery. 11 days later we took her to our audiologist’s office and she was “activated.” It was the most incredible experience to see your baby’s world open up.

To see her sense of hearing awakened was a moment I will never forget or take for granted. People always tell you, “ten fingers, ten toes…” but no one ever thinks about if your baby will be able to hear. Lia could now hear sounds, but we had a lot of work to do before she would understand how to listen. Together, we do several hours of therapy per week as well as attend a specialized school for deaf and hard of hearing toddlers. It’s incredible the resources we have supporting us. For that reason, Lia is excelling. Her listening and spoken language skills are at or above her typical hearing peers. 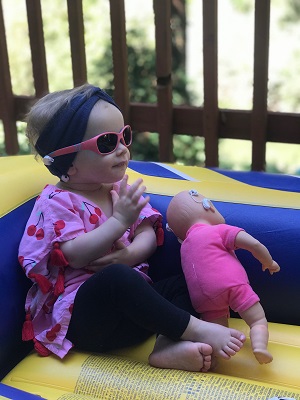 While we prepared for Lia’s cochlear implant surgery, we were advised to have genetic testing to determine the cause of her hearing loss. This was to rule out any possibility of a syndromic diagnosis that might lead to other issues. Again, we were told not to worry as this was only in very rare cases of hearing loss.

On the 3rd of August 2018, we got a call from our geneticist and learned that we were one of those very rare cases. Lia was diagnosed with Usher Syndrome Type 1B, which doesn’t only result in hearing loss, it destroys the vestibular system leading to serious balance issues for the rest of her life, but more significantly it leads to childhood vision loss, ultimately leading to blindness.

It was the most devastating day of our lives. We had just become comfortable with the fact that our baby was deaf…but now she would go blind? It was crushing and something we’ll never recover from.

Usher Syndrome Type 1B is a rare genetic disorder caused by a genetic mutation of the Myosin VIIA gene. This gene is responsible for the maintenance of the retina’s photoreceptors, the function of the stereocilia (hair cells) in the cochlea and the vestibular system. When they aren’t working properly, sound as well as information about balance and orientation is not sent to the brain. Since Lia was a good candidate for cochlear implants and we knew that through a lot of physical therapy we could help her with her balance issues, our biggest concern was that there was no treatment for her loss of vision. At least not yet.

There are researchers working on treatments that could prevent Lia from losing her vision today, but rare diseases often lack the funding that is needed to find a treatment. Justin and I have spent every spare moment researching promising treatments and working on creating our foundation called Save Sight Now  in order to fund medical research.

We have organized other families affected by Usher Syndrome Type 1B from across the world. We have forged a partnership with the Foundation Fighting Blindness (the world’s largest eye disease foundation). They have agreed to act as our fiscal sponsor which allows us to host fundraisers and collect tax-exempt donations. We also have access to their world-renowned scientific advisory board who advises us on the most promising research to fund. Long story short – the science is there, but the funding is not. Our mission is to fund promising Usher 1B – or Retinitis Pigmentosa – medical research and research teams in order to help them discover treatments and get into clinical trials before Lia and others with Usher 1B lose too much of their vision. It is literally a race against time.

Our first online fundraiser – #FightForSight – kicked off on August 12th and ended on September 12th.  Our goal was to raise $150K, and we are very happy to announce that we managed to raise $150,025! We will continue to raise money for Usher 1B research as we have a $2M goal over the next 2 years. We know it’s a big challenge, but it has to be, time isn’t on our side.  Every day that goes by Lia loses more vision.

Read more about Usher Syndrome, and how Carolien from the Netherlands fights for her son Jackson in her guest article.

We’re here to support you on every step of your family’s hearing journey. If you have any questions on your journey to cochlear implants for your child, you can connect with our local support teams for answers and guidance: My Child and Cochlear Implants